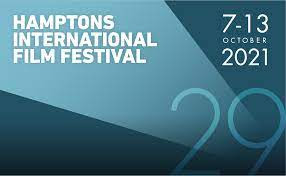 The Hampton International Film Festival starts this week and runs for two weeks. Its a festival that brings some of the best films from around the world on the East End of Long Island.

I will not be covering it since I'm too busy with the New York Film Festival. However that doesn't mean I can't point you toward some great films- to that end here is a bunch of reviews we ran previously and word on when other reviews will drop:

BECOMING COUSTEAU
BERNSTEINS WALL
COP MOVIE
FLEE
FRENCH DISPATCH (A review will post when the NYFF screening has been written up)
JOCKEY
LISTENING TO KENNY G
PAPER AND GLUE
PARALLEL MOTHERS will be reviewed at the end of the week
PASSING
PETITE MAMON will be reviewed after I see it this week.
POWER OF DOG
QUEEN OF BASKETBALL
QUEEN OF GLORY
REAL CHARLIE CHAPLIN
SNOWY
SOUVENIR Part 2
TITANE
STORM LAKE review will run this week
USERS