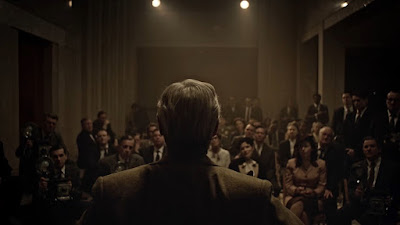 This Showtime BBC produced film begins with an quote that warns that there are a lot of different Charlie Chaplins and that it is impossible to connect them all up. The film then tries to explore all the different Chaplins in an effort to find create a much more complex portrait of the actor than we’ve seen before.

Mixing contemporaneous interviews, film, the written record and recreations The Real Charlie Chaplin gives us a great deal to ponder.  We get a wide variety of differing views of Chaplin, from childhood friends to the FBI and everyone in between we get a look at the man that is not really like any other version. Its not a glossy fan based portrait but something closer to the man himself. Its also colored by the film’s examination of the Chaplin that is in the public eye. We see the man who was so popular that there were literally hundreds of rip off films.

As someone who has been a Chaplin fan since I was a young kid, I was enthralled. While I have seen a lot of this before, there was a great deal more I hadn’t. More importantly the film is magnificently edited with several sequences delighting the eye with the magical way that they connect up all sorts of other wise unconnected films.

As a fan I was enthralled.

If I have to quibble, and in this case I do, the one thing working against the film is the narration. Much too low key and occasionally rambling, it seems intent of not pulling us into the proceedings as deeply as the images and the stories want us to go.  Its not fatal, but it makes an other wise excellent film just a very good one.

Definitely worth a look, more so if you can see it on a big screen where the film’s visual wonder can overwhelm.