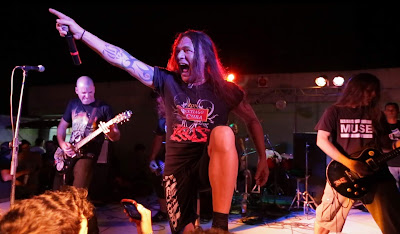 Portrait of the long running Cuban heavy metal group Zeus.
While the thought of another heavy metal biography may not thrill you perhaps if I told you that the group lives in Cuba may pique your interest. Telling the story of the group in their own words we get the tale of a group of guys who loved rock and roll and never stopped paying the music they loved. Along the way they went from political prisoners to cultural heroes. It’s a long strange trip told by a bunch of charming guys who had them not been in Cuba might have been worldwide mega stars.
To be honest as good as the film is, and as charming as the people occupying the film are, the film has one major problem, there simply isn’t enough music. Yes we get some music all the way through, but we only really get at the start and end. While what we hear is great rock and roll the lack of music kind of is head scratcher in that this is supposed to be about a band- and we should hear more of what one would think is the reason the film was made.
Posted by Steve Kopian at September 01, 2021