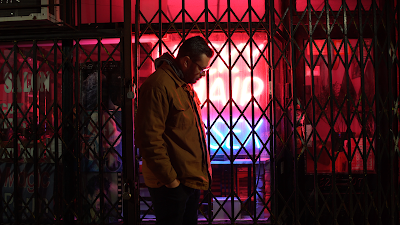 EXEXEX is a painful film. It’s a real life docu-fiction post mortem on filmmakers Ryan Balas and Dee Herilhy on the implosion of their marriage. It’s a film where they let it all hang out  as they open up their wounds for all of us to see.

I don’t know how much of this film is truth and how much is fiction. I don’t want to know. I don’t want to know partly because doing so would have me needlessly deconstruct the film  and its plotting, second guessing why changes were made. Part of it is I don’t want to consider the film that deeply since some (too much) of what Ben (filmmaker Balas ) says hits way too close to home. I just don’t want to  go to that place and have those emotions kicked up because it all is way too real for me.

That’s a rave boys and girls. Any film that can rip open my life and plop it on the screen  and have me not running for the exits is a real work of art and EXEXEX is one of those.

This is a beautifully made he said she said film. I don’t know when a domestic drama ever looked this good. Its wonderfully acted by the two filmmaker who are playing versions of themselves. They manage to make us like both of them and not take sides, even a little bit.

As you can tell, I was stunned by the film.