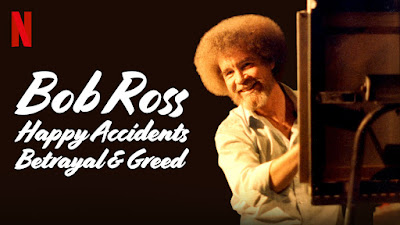 Its nice to see a biography of someone and realize that the person you always thought was sweet and nice really was. I mean seeing the Bob Ross documentary on Netflix is was great to see that he was a sweet man who liked to paint. Clearly he was no business man, but he was a really sweet guy.

BOB ROSS HAPPY ACCIDENTS, BETRAYAL AND GREED is the story of  Ross, the mad painter and the business partners who effectively screwed over every one around them. When you see anything Bob Ross these days it is the shady partners who are getting the cash and not the Ross family who were cut out. It’s a heart breaking tale of how Ross thought he was providing for his family and instead he was providing for other people.

The film itself is a nice little film. It plays kind of like one of Ross’s TV shows, being low key and inviting. Even as your heart is breaking its still kind of warm and fuzzy. Which actually is the films flaw, we really don’t get too angry at what happened. Yes the film tells us but the film never gets angry so we kind of don’t get angry. I should have been pissed  at the end, but I wasn’t. The result is a film we like but isn’t as cathartic as it should be.

Still, on it’s own terms the film entertains and informs and is worth seeing.