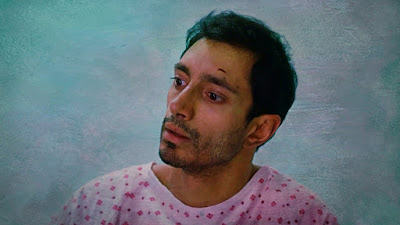 Riz Ahmed is almost certain to get his second Oscar nomination in two years for MOGUL MOWGLI, the story of a rapper who goes home to London and develops a illness which sidelines him.

This is a great film. It’s a film about finding ourselves, our past, our families, our spirituality and our lives. It’s a film rich in details of a life lived and a family we are connected to. I love the scene where Ahmed goes through his stuff from before he left. Its full of small seconds as he smiles at what he finds, and in those seconds we sense a whole story.  That’s what I love about the film, it constantly is showing us small things either up front or in the background that tells us more. Ahmed’s hallucinations, dreams and memories are full of these tiny details that tell us more than just what is there at face value.

Speaking of faces, Riz Ahmed’s face is painting by a grand master. For probably over half of the film he says nothing and just watches and ponders, and yet through his looks and his eyes we are flooded with emotions. We know what he is thinking and feeling better from looking at his face or posture than we do from his lyrics or his words. The final moments with his dad is full of words but dear god the towering flood of emotions flooding off his face says infinitely more than any word could.

I am in awe of what I witnessed.

You must see this. (And hear this the sound design is magnificent)

MOGUL MOWGLI is a great film and Riz Ahmed is even greater.