THE FIRST 54 YEARS. AN ABBREVIATED MANUAL FOR MILITARY OCCUPATION (2021)NYFF 2021 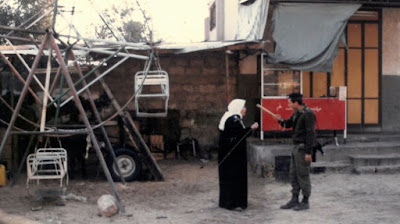 Avi Mograbi‘s THE FIRST 54 YEARS. AN ABBREVIATED MANUAL FOR MILITARY OCCUPATION is a brilliant film. A dark and sardonic look at the occupation of Palestinian land in the form of a manual on how to occupy  country it is a punch in the face formed by the words of the soldiers who acted as occupiers of Gaza and the West Bank.

Sarcasm and black humor  aside, the stories told by the Israeli soldiers tasked with maintaining control of the occupied lands sting repeatedly. Its clear from the outset that there never was a plan and that they were making it up as they went along. Worse the film makes clear that the soldiers were left to their own devices, with their only getting vague instructions at time. (They were told to set up a check point but not told what to do or who to stop) I was shaking my head at many of the stories being told. So much injustice it will break your heart, not so much because it happens but because much of the cruelty wasn’t planned.

What makes this film even greater than it would be if it was just about the Israeli occupation, is the fact that Mograbi‘s framing this as a manual for Occupation makes it relevant for so many others- America in particular whose ill thought out occupations of Iraq and Afghanistan have ended badly.  This is a warning to current occupiers and future generations that I’m sure will be ignored, if its even noticed. Mores the pity.

I am curious about how this is going to  play at the New York Film Festival. I suspect that there are going to be a lot of arguments in the audience during the Q&A and afterward as the various sides try to have their say.  I am very tempted to try and get a ticket  to see this at the festival to see what happens. I say this because I’ve been at screenings of similar films and watched fireworks happen.

Highly recommended, no matter which side you stand on regarding Israeli occupation