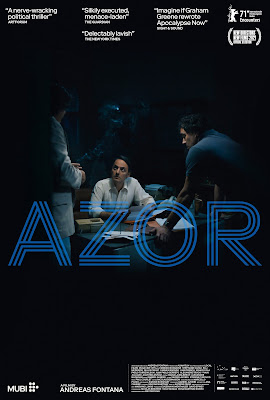 During the early 1970’s after the military coup, a Swiss banker and his wife go to Buenos Aires in order to replace his partner who has disappeared with out a trace. While he tries to reassure the ruling class that everything is fine as he makes new deals, he begins to hear troubling things about his partner and the situation in the country.

This is a dark political drama/political thriller. Many reviews are grabbing on to the similarities to Conrad’s Heart Of Darkness  because of one sequence in particular, however I would say that this is something much darker. What we see is not one persons journey observing as he goes but a turning of the soul of one man has he fights to survive in the dark world of a ruling junta and the powerful people behind them.  While our hero is nominally a good man , the fact that he is Swiss banking exec suggests there is a bit of darkness in his soul.

What I love about this film is that it doesn’t do anything we expect. Things are not overt. Everything is in the background and talked around. We may not see everything but we hear about everything and what we hear is enough to chill us.  This is a film that understands that many times inferring is more chilling then showing.

What is also great about this film is that it doesn’t do what you expect it to.  Its rhythms are its own things, it’s a film that is a perfect thriller that never really resorts to any of the thriller tropes. Not that you will mind, you’ll be so caught up in waiting to see where it goes to care.