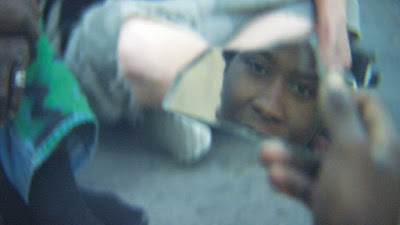 Deeply affecting short film  about life on the street.

This film will break your heart. It’s a stunning film that if the cinema gods are looking down will be in the running for the Oscar.

While focusing on all of the people street the film, it primarily focuses on vet Gerald Hall who has been in the street for five years. Hall opens the film  talking about how we need to ask the homeless if they are okay, if they need food and if they need help. It’s a stunning speech that will bring a tear to your eye as it give humanity to all of the people we ignore every day.

Running 40 minutes SKIDROW  has more emotion than any five feature films combined. Certainly it has more punch than most similar films.  As I just inferred above the film’s power comes from it’s insistence that everyone we are seeing is more than just a person we pass. Director Van Maximilian Carlson makes everyone so real and so much a part of our lives during the run time that we end up carrying them with us well past the end credits. That may not sound like much, but it is vitally important since it means that perhaps we will get of our theater seats or couches and actually go out and do something.