Filmmakers You Need to Search Out Part 5


Another Sunday and another part of my list of great filmmakers you need to trackdrown. If you missed any of the parts just go here and see who came before. And of course the list will continue so check back....

Justin McConnell is a great filmmaker  His CLAPBOARD JUNGLE (interview) is one of the best films on film you ill ever see. Its a collection on interviews with other filmmakers about the industry. His LIFECHANGER (interview) is an amazing horror film that transcends the genre to be something more and his short SOUL CONTACT which was made during the early days of covid is just a great deal of fun. There is nothing he can't do- and I willing to see every film he's made to make sure.

Tran Bao burst on the scene last year with PAPER TIGERS (Interview). Nominally a martial arts film it transcends the genre to be a touching family film. I can't wait to see what's next

Shaun Clarke is one of the great animators out there. He has a unique vision unlike anyone else. More to the point he takes big stories and makes laser focused versions. Hs  NECK AND NECK allowed m to understand Othello for the first time. His THE BEHOLDER is a wicked version of The Tell Tale Heart. I love everything he does.

I will be running an interview with Marq Evans very soon. Until that runs you need to know his bio of Wil Vinton, CLAYDREAM will move you to tears. His THE GLAMOUR AND THE SQUALOR is a magical look at the DJ who broke Nirvana and many others. Both films would seem to be your typical biography but the reality is they transcend the form.

Liam Gavin's A DARK SONG is an atypical horror film that has the smell of reality. It digs into your soul and stays with you. We need more like this.

Ralph Bismargi has created one of the funniest characters Herbie a well meaning life coach who misses the mark. He first appeared in HERBIE and continued in INSPIRATIONAL THERAPY . Rarely have any films so consistently doubled me over with laughter.

Elena Beuca's D-LOVE is based on a true story. The result is a lovely film. I'm hoping she has more true stories to tell 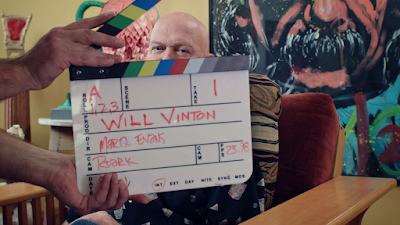