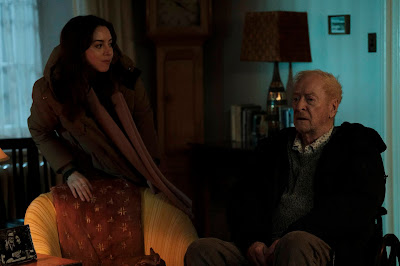 You need to see BEST SELLERS. You need to see the film because Michael Caine gives what may be his best performance on film, which would make it one of the greatest ever recoded.

The plot of the film has a young woman named Lucy desperately trying to save her families publishing house. The book that was supposed to save it has tanked. She may have to sell the company. She then realizes that Harris Shaw (Michael Caine) , a once great writer owes them one more book. He goes to see him, he tells her to get out. However he does eventually drop a novel on her desk and that sets in motion a cross country trip as they try to promote the book.

On a purely narrative level the film is largely unremarkable. It hits a lot of the expected notes, however the writing shines in the dialog and character construction, with the result the film is emotionally affecting.

However because  the filmmakers cast the film to perfection Best Sellers rises to the level of must see. Aubrey Plaza as Lucy is excellent. She takes a straight role, one that could have been bland in lesser hands and makes it a person we care about. We she is more than the typical tics the result is she kicks your ass in several scenes. She earns our love.

However shining above everyone and everything is Michael Caine. Accentuating his age, and seemingly not wearing any make up Caine looks like an older gentleman who has been kicked to the curb by life. Its all in the toilet but he’s still going, echoing a late in the game discussion of his novel as not being down beat but hopeful. He isn’t giving up but going on. There are years of heartbreak in his eyes and your heart breaks for him at every turn, even as he is making us laugh at something outrageous. It is a literally a full bodied performance with every move and gesture a master class. I was blown away from the opening moments and sat glued to the screen straight on to the end.

And when the film was done I was emailing and texting friends to say they had see this, because word has to get out.

And such is the problem with the Oscars and other awards- great performances get lost. I suspect that because BEST SELLERS is a small film from a small distributor the film and it towering performance by Caine will get lost. Because the film does not have big money behind it it will end up lost. Lost until five years down the road when it hits whatever streaming platform and people realize what a good film it is and what a towering performance Caine has given.  It will be spoken about as one of things Oscar got wrong

However don’t wait for the wave to come about BEST SELLERS you can see it when it hits theaters and VOD on Friday.

Trust me you will be moved