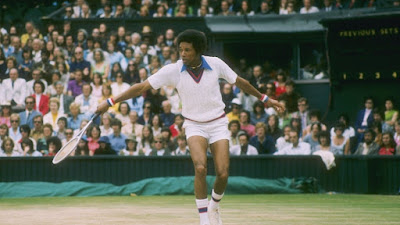 Arthur chose to speak- what did you do?

Portrait of tennis great Arthur Ashe that doesn't focus just on his tennis but the course he took off court in order to stand up for social justice in his own way.

Excellent look at a man many people know for the stadium named after him. More a film on the man himself then the achievements he achieved in sports, this is a film that will reveal to many what a great humanitarian he was. It is a film that beautifully explains how is need to fight racism and justice in his own way ended up changing the whole world.

The fact that Ashe wouldn't follow the more radical path of fighting for racial equality. As several people pointed out his seeming non-confrontational approach had him labeled as an Uncle Tom, however in retrospect the ones labeling him realized they need his ability to walk both sides of the barriers. They also pointed out that Ashe was the one who started to bring awareness about South Africa. Ashe was so important to that fight that when Mandela was released and came to America, he stopped what he was doing to go over and hug Ashe at a function.

The film moved me repeatedly to tears. The Mandela moment touched me. As did the bond between Arthur and his brother Johnnie. Johnnie knew what his brother was capable of and to prevent his getting killed in Vietnam he signed up for a second tour. It may not sound like much, but he clearly loved his brother and sensed his brother was going to do great things.

I truly love this film though the film stumbles slightly in the last third when the matches with Jimmy Connors shifts things away from Ashe the activist to Ashe the sportsman. The film also missteps by going into a coda about Ashe's books after the mic drop statement that heads this review is spoken. To me that's the perfect ending and a perfect summation of Ashe's life and we don't need to go beyond that.

Quibbles aside this is a great film and a must see.