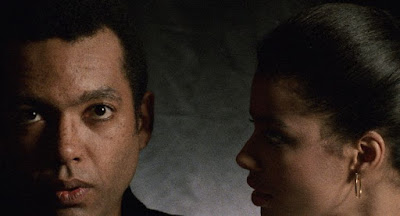 They sent some press material for Chameleon Street around saying that it’s nearly forgotten. The only people who have forgotten the film are those who haven’t seen it because once you see it it burns into your brain and stays there forever.

I first discovered the film  when I saw a clip from it where William Douglas Street Jr. talks about the smell of white people in the rain. The smell is very close to that of a dog.  I remember staring at the TV screen and wondering what I was seeing. What ever it was intrigued the hell out of me and I went on a long quest to see it. The resulting viewing left a lasting impression that is still raw to this day.

The plot of the film has writer director Wendell B. Harris Jr. playing William Douglas Street Jr., a real life chameleon who went through a series of impersonations as a lawyer, a surgeon and other occupations. He gets away with it because he is a super intelligent man, who also is a very angry one. It’s a rage that that bleeds out toward everyone around him. He is angry at the world, both white and black and he lets everyone know.

I remember being floored by the film when I first saw it. Yes I had seen films that portrayed racism and social injustice in America, but here was a film that was light years beyond them in that it didn’t just show us the inequalities, but also explained it to us in no uncertain terms. Writer director Harris was going to make damn sure we knew what his point was and we knew it. For me this was the first time that I had seen a film that had found the right words to express the rage in more than just emotional way.

I suspect that the reason Chameleon Street has kind of drifted off is that it is a difficult film. Its not just the subject matter but the central figure. William Douglas Street Jr is not a pleasant guy. Yes we feel for him, but he also kind of annoys us. He is abrasive and kind of unlikeable. We know why he is the way he is but it doesn’t make him easier to take.

Difficult central character aside, Chameleon Street is a masterpiece. It is one of the great films of  the last three decades. It’s a film that raises a lot of questions about race and society and forces us to confront them.

Highly recommended, a new restored version of the film is playing the New York Film Festival before hitting theaters soon after.