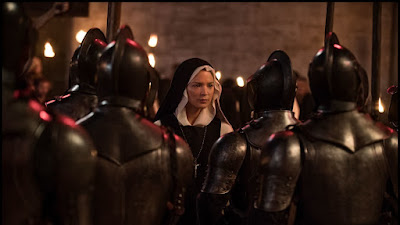 Paul Verhoeven's BENEDETTA brought out a bunch of over reacting Catholics to protest the film before anyone had a chance to see it. They said the Rosary and played bagpipes and were generally ignored by everyone (video here). They seemed to think the film was going to damn us all to hell for it's mere existence.  I didn't mind since the day before I was told, in all seriousness, that short sleeves and jeans were not worn in heaven and I was therefore damned to hell.
The correct response should have been to have at least one of their number go see it to see if it was blasphemous, but they were too busy shouting Hail Marys and asking for reparations (I don't know for what.)
The film concerns the true(ish) story of a nun named Benedetta during the time of the plague. She talks to the Virgin Mary, has vision of Jesus and is trying to get closer to God. Things begin to go sideways when she asks that a young woman seeking shelter from an abusive father is allowed to join the order. As the pair become friends and then lovers, the visions amp up as Benedetta develops stigmata and has more visions. The local head of the church sees an opportunity for advancement and then things go sideways.
There is no getting around it Verhoeven's film is all over the place. At times a comedy, it is by turns sexy, cynical and profoundly spiritual. Its as if the director was going to try and have everything all at once. Sometimes it works and sometimes it doesn't.
Verhoeven clearly has no use for the Church, since its clear that everyone is out for a buck. From the Abbess hitting up families for dowries to the head of the church looking to expand his horizons everyone is running a con. They ant cash and they want to be in control Perhaps even Benedetta.
The question that hangs over much of the film is is Benedetta scamming or is she the real deal. No one is certain despite the blood and the seeming possession of the young woman by a pissed off Jesus. Verhoeven tries to hedge, but despite the cynical nature ultimately you realize that what is going on is some sort of manifestation from God. That makes this a rather unexpected and strangely profound act of faith. Though the truth it reveals is not fully accepted Catholic doctrine even if it is probably deeply Christian.
Spiritually I was kind of moved. I didn't expect how this went which delighted me since it's strangely hopeful. It is, ultimately, an expression of God's love will win out if you believe and accept the pain
However as much as I would love to say the film is great it is not. As I said above Verhoeven has made a film that is all over the place. First and foremost he never get the tone right. Comedy gives way to horror to drama to a polemic to comedy and on and on. You can never grasp it and get lost in it.
The plotting is also a mess. Benedetta's character suddenly changes at a certain point from a frightened young woman to a seemingly optimistic ladder climber. She is suddenly a force of personality just because. It doesn't feel natural and  it makes how we view events artificially colored. There are a couple other turns that are the hand of the director moving things around around rather than events playing out. Clearly Verhoeven doesn't care since he is going for effect but it makes it hard to accept some turns that could never happen in the real world.
Truthfully I don't know what I think of the film, even several hours after seeing it. As I said to Alec Kubas Meyer who went with me to the screening, my feelings are all over the place. This is a film you need to wrestle with, and not take on face value.
Is it worth seeing?
Yes absolutely. As long as you know it's wildly uneven in presentation its worth seeing since the ideas and themes it explores are worth discussing, even if some members of the church don't think so.
Posted by Steve Kopian at September 27, 2021