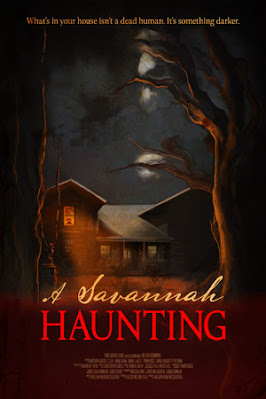 A family from California moves into a new fixer upper home. They are trying to get over the death of their daughter by drowning. However weird things begin to happening and it soon becomes clear that what is happening in the house is something much darker.

Good little horror film is kick. It may hit a lot of the expected notes, but once the film gets going and the darkness is really released the film takes off. I was watching the final run to the end and was feeling a little creepy. What can I say the black eyes always wig me out.

In all seriousness I see a good number of small scale haunted house films every year, and while most of them manage a scar or to few are as shivery as A SAVANAH HAUNTING.

Definitely worth a look when it plays the Winter Film Awards.