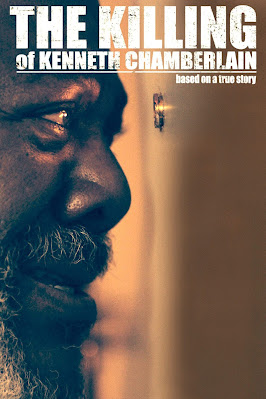 This is a long pained scream. Its watching a horrible event happen that you know is going to go wrong and as much as you want to you can not stop it. This is the film you find in the dictionary under gut punch.

The film is a recreation of  the killing of Chamberlain in 2011. He accidentally set off his medical alert and the company called the police. The police showed up. Chamberlain said he was fine the cops didn't believe him and they eventually broke down the door and then shot him while he was on the floor, later claiming he lunged at them.

This film will break your heart and make you scream at the screen. ten years on we see all the mistakes that were made, but we can't change them. This is a tough film to watch not just because its tragedy, but because we see how big it was and how it could have been stopped.

While the film, isn't perfect, the cast is a bit on even, Frankie Faison as Chamberlain is dead on. This is a performance that if this were a bigger film would have had him in talk for an Oscar. It is one of the top three performances you will see all year. This is the role of a life time and Faison grabs it by the throat and gives us a man we can grieve. This is a character with a soul that we can not help but follow to his much too early end.

This film crushed me.

(Better yet program it with the documentary JOE AND ERNIE CRISIS COPS for a real life look at the way these sort of situations should be handled.)