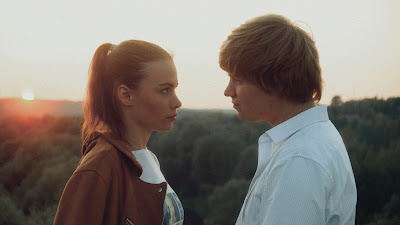 I’m going to start by saying that if you see DREAMOVER you MUST stay through the end credits  because the film’s ending is in a post credit sequence. If you don’t the film seems to end on a WTF note.

The plot of a film has an unhappy man experiencing nightmares getting a treatment to end them. The process is supposed to change his way of looking at life by having him reexperience a time he was in love. We then follow his nightly romance.

How you react to the film is going to be determined by how you react to the ending of the film. This is a really nice romance that plays out in unexpected ways. Its so nice to see the course of love play out in a more realistic sort of away. It kicked up a lot of emotion for me as I could relate to much of what happened.

That said- there isn't much to say beyond that since the only way to really discuss this film is to do it from start to finish - the real finish. So stay through the end credits because the pre credits ending is not the real ending.

DREAMOVER plays at Dances With Films September 5. For tickets and more information and tickets go here