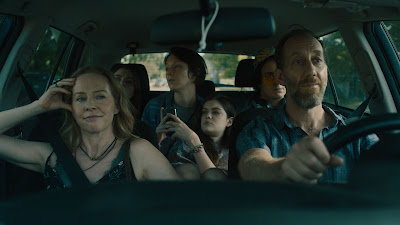 Divorced father living with his two kids meets a single mom on a dating site. They fall in love and move in together. However the course of the relationship is bumpy with her love of kink and his getting a job at a Christian College.

Romcom/family comedy has some solid laughs and some nice characters which allows the film to over come the forced nature of some of the plotting. While the kink, Christian and pot angles provide some chuckles, they feel less organic and more like an attempt by the filmmakers to make a film that stands out. To be honest you could swap out or remove any of those angles with something else and have the film work just as well, and probably feel a bit less forced.

Still regardless of my quibbling I laughed in the right places enough to make this a film worth trying.