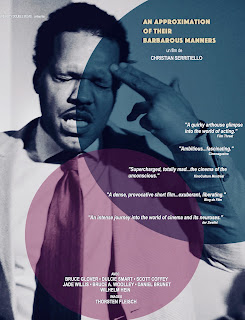 Bruce Glover goes missing from a film set shortly before his latest film is set to begin shooting.

This short is kind of hard to describe. I mean I can tell you the details of what happens on the set as the film crew gets ready to shoot and then runs into problems but the effect of the film, the slowly shifting turns are impossible to describe, They are more things you need to experience more than see. I say this because the cumulative effect is much stronger than the pieces. Its really good and I can't wait to see it again

What I do have to say is that the film's opening piece, an audition tape of Glover's gave me a new respect for the man. I always saw him as this character actor who played weird roles, but watching the opening bit I was caught off guard and I realized just how good an actor he is. Even if the film isn't as good as it is I would recommend it for that short bit.

Definitely worth a look- preferably on an evening of film related films (say HOPPER/WELLES).