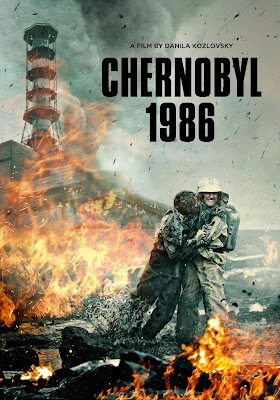 Fireman reconnects with his lost love just right before the Chernobyl reactor explodes and he goes off to fight the fire.

This is a wildly uneven film that is one part cheesy soap opera and three parts frightening recreation of the early hours of the nuclear accident.  If you can get through the mawkish and over blown soap suds machine of the first half hour you’re going to find yourself in one hell of a frightening ride. The opening bit, and anything having to do with the romance is going to have you talking to the screen because it is so obvious and so heavy handed.

On the other hand the main section of the film following our hero’s tragic fighting of the fire with scare the living shit out of you. Yea the HBO series may have rocked you, but this film will terrify you. I say that as a person who is a student of the accident. I’ve seen all sorts of recreations and but the one in CHERNOBYL 86 are really visceral. The film wants to make a statement and it does. Where the HBO series made me ill with what happened, this film punched me in the gut.

I’m not going to lie and say the film is perfect, it isn’t. It tweaks events for its own ends and to make it love song in a way to mother Russian, and of course it is overly melodramatic. It occasionally under cuts the thrill ride tension with a misguided move to tug the heart strings, but it still drags us along.