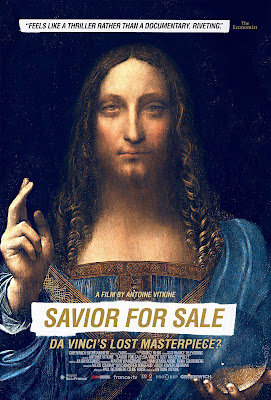 How you react to Savior For Sale will be determined by if you saw the  earlier Lost Leonardo which was released a couple months back. Both films are about the discovery and sale of the possible found Leonardo painting, Salvatore Mundi,  its restoration, authentication and sales. However  each film has its own focus. The earlier film is focused on the whole process from the discovery to the eventual sale to a Saudi Prince. The current film is less concerned with the discovery and restoration and focuses more on  the authentication and the sales of the painting.

The short version of the story is that a painting that looked to potentially be an old master came up for sale in New Orleans. A New York art dealer bought it. In looking at it, he and his experts decide that it may be a Leonardo DaVinci. They have it restored, its shown at the British National Gallery when experts say it’s the real deal (well possibly…). Its then sold and then resold to very rich people for more than the GNP of some countries.

To be honest I’m not sure what I think of this film. I know that my feelings for it were influenced by seeing the other film mere months ago. The fact that I have  that film in my head influenced my feelings for this film since the earlier film raises some intriguing issues that are not covered here. A key one is how much of painting that we see as the “restored painting” is the work of Leonardo and how much is the work  of the restorer. The earlier film also raises different issues about the authentication process. I wish  that the film had more of the details on the painting from the earlier film.

That said I do like the way this film deals with the big money aspects of art  and of this sale. It raises a lot of questions about how the art world works and whether things are really what people hold them out to be.

Frankly I would love to take the two films and cut them together.