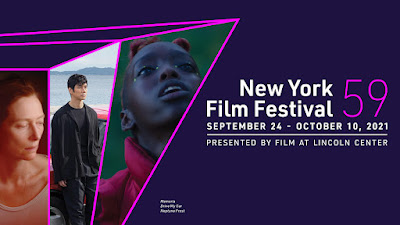 The 59th New York Film Festival starts Friday and if you are in the New York area you should try and get tickets and go.

This is the big fest for me. This is one that I first noticed as a kid, it was the first one I ever attended (Peter Greenaways PROSPERO’S BOOKS), the first fest I was ever accredited for. It’s a festival that means the world to me and its back for the 59th time. And it’s all over the New York area with screenings all over the place (details here)

This is a fest where you need to be in a theater seeing films because you never know what will happen. I mean I’ve heard an audience plot to kill a director. I’ve seen walk outs. I ‘ve seen fights. I was there when Debbie Reynold’s called in to a Q&A where Carrie Fisher was holding court. I saw Hayao Miyazaki be completed confused when  a smiling young man waded into a sea of young girls to get his autograph. And I’ve wandered out of screenings talking to various celebrities who just happened to be there.

It’s a magical fest where anything can happen.

Normally at this point I would make some recommendations, but to be honest I’ve only seen a handful of films at this point. Indeed the press screenings are only starting today so I haven’t seen enough to do a must see list (though The First 54 Years: An Abbreviated Manual for Military Occupation​, Chameleon Street and Sweet Sweetback's Badasssss Song are must sees). As a result you will just have to keep checking back to see what we are reviewing.

I did see a couple of films at Sundance and as I did at that festival I am only mentioning them rather than doing full reviews:

PASSING was one of my must sees at Sundance. However when I saw it  I couldn't connect to it. I kept seeing the hand of the filmmaker instead of the film. Worse I kept wondering what an African American writer/director would have done with it. Its on okay period piece that needed a different director.

I tried the film FLEE about an Afghani refugee in Denmark after seeing three of the best films of Sundance in rapid succession. Not long after starting the film I realized that what I was seeing was very good but it was paling in comparison so I stepped away. I retried the film again at the Camden International Film Festival and while I still like the film (but I still don't love it) I also still feel disconnected enough to it not to write it up where my words may end up sounding like a pan, when they are not.

And now to go back to writing up films.  While I do that why not go here and buy some tickets.

Email ThisBlogThis!Share to TwitterShare to FacebookShare to Pinterest
Labels: NYFF 2021