The Faithful: The King,The Pope And The Princess (2021) Camden International Film Festival 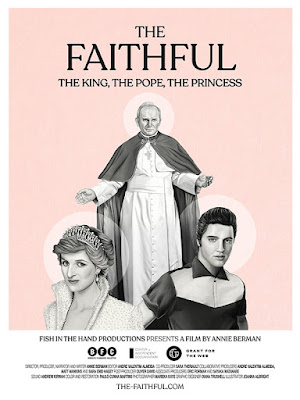 The Faithful is a look at the cult of personalities for Elvis, The Pope and Princess Diana. It’s a mediation on images, memorabilia and their importance in peoples lives.

One part documentary and four parts essay this is the sort of cinema exploration that would play in an experimental section of film festival. The film is footage shot over several decades relating to the subject while writer director Annie Berman talks about the ebb and flow of her interest in the subject and related matters. It’s a kind of illustrated lecture.

Whether you like this film is going to be determined entirely by how you take Berman‘s presentation which is low key and bit rambling. My interest came and went. I kept thinking this would have been better if it was tightly crafted short  about  a third  of the  length. On the other hand I know from attending film festivals over the years I know there is an audience for this sort of thing. If you are part of it then this film is for you.

ADDENDUM
I was informed by the filmmakers that there was an issue regarding the Camden version. For some reason the audio did not sync with the image creating a trippy experimental feel. I will attempt to see the film again down the road and see if it changes my opinion,