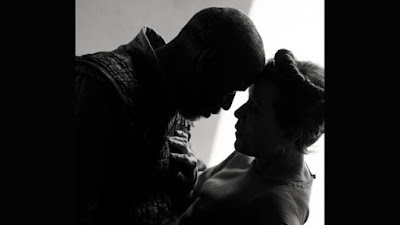 Shot in black and white and the Academy ratio this is a throw back to the golden days of Hollywood, German expressionism, Carl Dreyer's THE PASSION OF JOAN OF ARC and the theater, the film looks great. In actuality this film is almost certain to be nominated for numerous technical Oscars. Coen and his team have created a visual world that delights the eye at every turn. There are eye popping images all through out the film, anything with the witches, the cauldron scene, and the glorious shot of the death of Macbeth. Its a delight.

The performances are largely top notch. Denzel Washington is amazing in the lead. His madness makes me hoping that he wades into King Lear soon. The real discovery here is Kathryn Hunter as the Three Witches. Its a haunting performance that ill almost certainly bring her awards gold, including an Oscar because despite everything else going on she is the one actor you will remember above all others.

And as for the rest of the film, its all a series of problems almost all of them Joel Coen's fault.

At the post press screening at the New York Film Festival Coen spoke about designing the film so that the film constantly reminds us that the film is based on a play. He sought to meld the play as written with cinema. The trouble is the result is a film that is kind of dead.  Using long frequent close ups, like Dreyer did in JOAN OF ARC, he films the characters speaking to the camera/audience.. It's an interesting idea but with the tight aspect ratio mixed with the lack of movement in the frame results in a the cinematic equivalent of having a character stepping forward and declaratively speaking their lines. Its a mode of stage acting that has been made fun of for decades (and resulted in my walking out on Christopher Plummer doing King Lear) because it's silly. Coen said that he wanted  to shoot the characters speaking to the camera, especially with the soliloquies, because he said most times they are done as voice overs and he didn't like that. Perhaps it doesn't work in some cases but filmmakers like Kenneth Branagh make them gripping living cinema. This is inert.

This close up way of doing things results in a wildly off kilter performance by Frances McDormand. She doesn't act her role but performs her role as if it's a showy one woman show of her greatest roles. I found much of it laughable and was biting tongue. She is in a grand stilted stage production while the rest of the cast seems to be in a real cinema world.  I don't blame her entirely, since her husband's choice of framing the action essentially has her (and the rest of the cast) acting in a vacuum.

The  framing of the action is a major flaw with the whole film. The close ups could be okay, but pretty much every other shot is a tableaux making everything static. The few actors in any scene are posed in artificial locations. Since he keeps the number of actors on screen small all the times the tableaus result in no one being connected to each other. As I said everyone is acting in a vacuum, or a large scale Zoom call. These are isolated people not humans interacting with each other.(Look at the scene where Macbeth is woken up to be told he has been promoted. It's separate shots assembled with no one sharing the same space unless thy are standing next to each other). This means we never really know who these people are and what their relationship is.

It's a situation made worse by his rewriting and tweaking the source material. There are deletions in the text that eliminates a lot of the exposition.  Its not always clear who everyone is. I say this not as a Macbeth newbie but as some one who has loved the play for four decades. I've seen too many productions to count and a good number of film versions but  despite being able to talk about the plot at length, I was frequently lost. Its not the cross cutting or the rearranging, it's  simply that where in a good production you can tell who everyone is, Coen has removed small bits that only allow you to know who is who if you know who says what line. He has killed any sense of who anyone is other than Macbeth and his Lady. He also reimagines the role of some characters such as Ross, who now becomes a kind of deus ex machina, moving some events forward (such his role at the end)

I can not imagine how lost someone who doesn't know the play will feel if this is the first version they encounter. Its everything that is wrong with most bad stagings of the play.

Coen's spatial problems continue  within the physical space of where things happen. Characters walk around the castle randomly, often goin into the same set that is supposed to be a different location. Lady Macbeth wanders around doing "out out foul spot" in places that don't match other shots- and or a jutting cliff that just appears outside the castle. Yes, you can do that on stage, but you can't do it in film unless you construct it differently and lay a groundwork. Yes, Coen is going for effect but the effect is confusion. A continuing thought was "Wait where am I?"

Coen also grossly misreads Macbeth's character. Instead of a slowly corrupted good man, he's portrayed as a guy instantly ready to kill the king. Where did that come from? I understand you want him to be ambitious, but homicidal from the get go? That seems to be a rewrite of the early part of the play. What Coen doesn't seem to understand is that by making Macbeth ready to kill he lessens Lady Macbeth. She is some how diminished and less of a monster. Actually he makes the character completely unnecessary. She is supposed to be a catalyst to push him over the edge, but that's all gone. Why have her in the play at all then? The whole plan is staged as if Macbeth as planning it from the start (the letter). It removes the notion of real tragedy because he's a monster (Richard 3 eat your heart out)

While I know this film delighted many at the New York Film Festival, this is a film that will never really leave the art house. Yes the cast will get it seen but I doubt outside of a handful of Shakespeare fans, few will ever return to or recommend this beautiful misfire.

Visuals aside this is the worst screen adaption I've run across, and there are some misguided film versions out there.