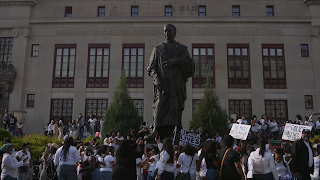 This is the story of five people killed by the police as told by the women who knew and loved them. All of the killings should have been considered murder but were not. For example in one case a vice cop who was under investigation killed a woman at a sting. Another is the story of short teen was killed by a cop looking for someone who was a foot taller than his five foot two inch frame.

This is a film that needs to be made into a feature film. We need to know more about these people than the roughly four minutes each is allotted.  All our lives deserve more than mere minutes.

Quibbles aside this film is a kick in the gut. Short or no the accumulative effect is a deep sadness. These people should not have died, certainly not at the hands of cops who should have known better

The film is currently screening at the Camden International Film Festival (and other festivals soon) and is recommended.

Hopefully this will also get turned into a feature film