I am way way behind in posting this. But here is the information for the great Port Jefferson Documentary Series fall slate.

If you are on Long Island you need to attend. Details, directions and tickets here. 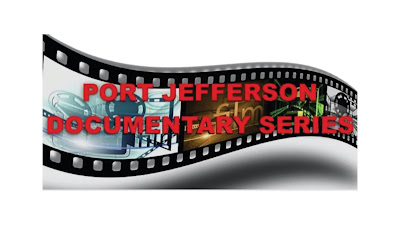 The Fall Selections are all in person at Theater Three

LOVE IT WAS NOT

The romantic relationship between Helena Zitron, a beautiful Jewish prisoner at Auschwitz, and SS officer Franz Wunch remains one of the most confounding stories of Holocaust survival. Fascinating first-person accounts confirm their affair began when Helena was forced to sing at a party where she caught Wunsch's eye. Besotted, he transfers her to lighter duties, and even nurses her through typhoid. But when Helena's sister Rose arrives at the camp, a tragedy irrevocably fuses the fates of the three together. Whether Helena was simply surviving, collaborating, or truly in love with Wunsch will haunt both sisters even 30 years after they flee to Israel. Meticulous historical investigation reveals that Wunch repeatedly tried to reunite with his love over the years, ultimately requesting Helena testify at his war crimes trial in 1972. Rescued by her beauty and her will to survive, Helena recognizes her need to tell the truth and is forced to make an impossible choice once again.

A modern day Walt Disney, Will Vinton picked up a ball of clay and saw a world of potential. Known as the “Father of Claymation," leading a team of artists and writers, Vinton revolutionized the animation business during the 80’s and 90’s. But after thirty years of being the unheralded king of clay, Will Vinton’s carefully sculpted American dream came tumbling down. Marq Evans’ CLAYDREAM takes us on an exciting journey, rich with nostalgia and anchored by a trove of clips from Vinton’s life work, including his iconic, classic California Raisins, The Noid from old Dominos commercials, The Pj’s, written by Eddie Murphy and the Gary and Mike TV shows. Structured around interviews with this charismatic pioneer and his close collaborators, the film documents Vinton’s many successes and how he was unable to capitalize on them. In his documentary, Evans has effectively created a cautionary tale by bringing to life the battle between art and commerce. It’s a tale that is as old as time and always sad to hear. In this case, Vinton was overshadowed by two powerful forces: Disney and Nike. CLAYDREAM is an insightful portrait of an artist who put so much of himself into his craft, and is brought back to life for a whole new generation to explore his colorful world of adult animation.

In January 1970, hippie-millionaire Michael Brody Jr., the 21-year-old heir to a margarine fortune, announced to the world that he would personally usher in a new era of peace and love by giving away his twenty-five million dollar inheritance to anyone in need. In a frenzied few weeks, Brody and his young wife Renee ignited a psychedelic spiral of events. Instant celebrities, the Brodys were mobbed by the public, scrutinized by the press, and overwhelmed by the crush of personal letters responding to this extraordinary offer. Fifty years later, an enormous cache of these letters are discovered--unopened. In this riveting follow-up to his acclaimed film, TOWER, presented by the PJDS in 2016, award-winning director Keith Maitland reveals the incredible story of Michael Brody Jr. and the countless struggling Americans who sought his help, to create a deeply moving meditation on desire, need, philanthropy, and love.

A state of secrets and a ruthless hunt for whistleblowers – UNITED STATES VS. REALITY WINNER is the story of 25-year-old NSA contractor Reality Winner who leaked a top secret document to the media about Russian interference in the 2016 United States elections. German documentary filmmaker, playwright, author, and photographer Wim Wenders serves as an executive producer.

When 32-year-old activist and father Ady Barkan is diagnosed with ALS and given four years to live, he finds himself in a deep depression, struggling to connect with his young son, whose presence reminds him of the future he will miss. But, after a chance confrontation on an airplane with Senator Jeff Flake goes viral, Ady decides to embark on a tour of America, using his final breaths to fight for healthcare justice, and ultimately discovering that collective action and speaking truth to power can not only inspire movements, they can offer personal and emotional transformation as well.

IN BALANCHINE’S CLASSROOM takes us back to the glory years of Balanchine’s New York City Ballet through the remembrances of his former dancers and their quest to fulfill the vision of a genius. Opening the door to his studio, Balanchine’s private laboratory, they reveal new facets of the groundbreaking choreographer: taskmaster, mad scientist, and spiritual teacher. Today, as his former dancers teach a new generation, questions arise: what was the secret of his teaching? Can it be replicated?

Filled with never-before-seen archival footage of Balanchine at work, along with interviews with many of his adored and adoring dancers and those carrying on his legacy today, this is Balanchine as you have never seen him. This film will thrill anyone interested in the intensity of the master-disciple relationship and all who love dance, music, and the creative process.

MISSION: JOY - FINDING HAPPINESS IN TROUBLED TIMES is a profound and jubilant exploration of the remarkable friendship between Archbishop Desmond Tutu and His Holiness the Dalai Lama. Inspired by the international bestseller, The Book of Joy, the documentary welcomes viewers into intimate conversations between two men whose resistance against adversity has marked our modern history. Through rare archival footage and affecting animation, the documentary reflects upon their personal hardships as well as the burden both men carry as world leaders dedicated to bringing justice to and fighting authoritarianism in their communities. The film gives us a window into the inner lives of these influential figures as they enjoy a week together laughing, sharing wisdom, and delighting in the rarity of spending time with a good friend.

With COVID cases rising again on Long Island and considering the ever-changing public health safety environment, the Board of the Port Jefferson Documentary Series has been reviewing what needs to be done to keep people comfortable and safe at Theatre Three during our upcoming fall series. Theatre Three has now settled that question. Like all Broadway theaters, the Hamptons International Film Festival and many concert venues, Theatre Three has implemented new protocols for all staff and attendees who enter the theater.  See Below From Theatre Three:

All THEATRE THREE patrons must wear a mask regardless of vaccination status.

In addition to the above mask requirement, all THEATRE THREE patrons (ages 12 and over) must be fully vaccinated* with an FDA-authorized vaccine to attend performances. Therefore, all patrons entering the theater must show a Vaccination Card or Excelsior Pass along with a valid ID.

Children under the age of 12 may attend performances with a fully vaccinated adult as long as the children wear masks throughout their time at the theater.

Please understand these protocols are for the safety and health of our patrons, employees, and community. Again, we thank you in advance for your cooperation.

* "Fully vaccinated" means the performance date you are attending must be:

1. at least 14 days after your second dose of the Pfizer-BioNTech or Moderna COVID-19 vaccines.

2. at least 14 days after your single dose of Johnson & Johnson's Janssen COVID-19 vaccine.

Theatre Three's COVID-19 protocols remain subject to change. Any policy adjustments will be found on our website and social media as well as communicated to ticket holders in advance of their performance.

As we have since the pandemic arrived in March of 2020, the Film Board is balancing the health and safety of our filmgoers with our desire to continue to entertain and inform you by screening the best, new documentaries. Of course, health and safety are paramount. We support Theatre Three’s decision to hold the well-being of the community above all else and we hope you will too.