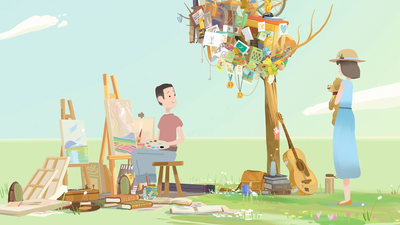 I know this is late. I did this interview back in June at Tribeca and then things happened. (The short version is transcribers messed up the delivery by six weeks) My apologies to Erick Oh and  Kane Lee

What follows is my discussion with Mr Oh (tThe director) and Mr Lee (the producer) about the film NAMOO which premiered at Sundance as a  VR experience and Tribeca as 2D film. Based in part on the life of his grandfather, Mr Oh's film is a look at the arc of a life and the things we take with us. It's an amazing film and one you need to track down.

This is a slightly edited version of my talk. I trimmed a couple of questions and answers that required you to have seen the film for them to make sense. I also removed a very brief talk about Mr. Oh's Oscar Nominated short OPERA where we discussed that film being designed as a museum installation as something as being a film you could get up close to. While I had hoped to talk more about the film talk instantly bounced to NAMOO.

I want to thank Mr Oh and Mr Kane for taking the time to talk to me abou their amazing hort film.

Steve: How how did you decide to turn your grandfather's life into a short film?

Erick: Yeah, so my grandfather passed away almost 10 years ago. And then, you know, within the grieving process, I got to think a lot about life, you know, where we come from and then where we go.  But, at the time, I was a little too emotionally overwhelmed to take this out to the world. And I didn't know how, even though I had this core idea and concept of tree immediately when I lost my grandfather, almost, but I didn't take it to the next level.

But as I grew up. I learned more about life. At a certain point I kind of realized that now it's about time, really. I'd love to put this together as an art piece or a short film and then share it with a lot of people because, you know, there is some-, something very truthful in it.

Steve: How did you decide, like, which pieces of your grandfather's life to use? You have to have the painting, you have, all the things in the tree. How did you decide which, what were you going to put in there?

Erick: This was not about my grandfather, I mean it’s inspired by him but  I kinda wanted to talk to about this human story of who we are, you know? So that being said, you know, all the object choices I made, you know, is really based on my own personal experience as well. I'm an artist. My grandfather wasn't. He was a professor. So I was merging everything I've been learning from my own life. Of course my relationship with my grandfather and my own  life helped me choose all those objects that's, the belongings hanging on the tree.

Erick: [laughs] It's really mixed, you know, because I'm basically in late 30s, so there's no way I’m, passing middle, middle age. I mean  these characters are real ones, even my father. And then even my newborn niece, who was born, two years ago. I got so inspired by my newborn niece, and then passing certain life stage, that's when everything turns a little more closer to, like, my, my father and grandfather.

And for example, the grandfather sequence there is a lot of objects that create a little more kind of traditional like a teapot or some sort of lens. And those were actual physical belongings my grandfather used to have.

So it is, again, all combination of what I was  experiencing throughout my whole life.

Steve: How did you decide on the visual style of this? You worked on "DAM KEEPER," you did "OPERA," which was nominated for an Oscar prior to this. And while this looks a little bit like DAM KEEPER, it has its own look. How do you decide what the visual style's going to be of a film you're gonna do?

Erick: It is a spiritual journey, internal journey to yourself, so I really wanted something that's really warm, traditional hand-cut feeling. I wanted to keep the watercolor look, and that has been there from the get-go. But then we invited this technology that we can actually animate and paint and create everything directly in VR the software called Quill. And Quill's aesthetic was very unique.

And so, with that and with a bit of, post-production effects work, we were able to achieve what we did. And as an outcome, what we got is it is a very heart-warming and  hand-touched vision of feeling but three-dimensional.

I'm really happy with how it turned out. But Kane, if you wanna, explain a little bit about the VR or, or that aspect, please, please do.

Kane: Yeah, I mean  bn  you know, we worked with a crew across nine different time zones. And actually made our plan for our production before the pandemic. We decided to go with  our top choices no matter what time zones or what part of the world they were in. We were really excited to use  Quill which, you know, you can paint and hand-draw in real time. They literally put on a headset and they're in a three-dimensional space. The back is the objects. Everything that's painted like, a really sort of hand-sculpted, feeling and texture and you can feel every brush stroke. And  the imperfections are actually what makes it feel really handcrafted.

And so with that being translated 2D animated film that you see is what gives this sort of a dimension-, dimensionality, and a feeling of handcraftedness that we feel looks unlike other projects that Erick or Baobab Studios, the animation studio  behind this, have ever done before.

Steve: Is there a VR version of this or just, just the 2D?

Kane: There is a VR version of this. So we created them at the same time. The VR version of it premiered earlier this year at Sundance. But the Tribeca Film Festival gave us this opportunity to have it in person and for people to see it on-screen.

I was our huge pleasure and priority to get the 2D version to people together so they can experience the emotion and, and that feeling of being in the crowd, seeing,  something on a big screen amazing sound at the same time.

Steve: I'd loved to see the VR thing of that version of this. Because when you're watching it, there's, you know, it's, it's very 2D for most of it. And there's a couple of times where it's like, the, the, suddenly the animation pops in the 2D version. Suddenly you get, everything gets the depth of 3D. Suddenly it's like you get chills to a certain degree.

How did you design the soundtrack? The story is tols told completely visually, But the sound is just as important as the visuals. It's a perfect marriage. And a lot of times, you don't really necessarily get that.

Erick: You're totally right. because we don't have any dialogue, we already knew that we are making a visual poetry. So we knew that look and music, it's like almost a 50/50 balance.Then music is telling you the story. It is guiding you with the feel and he story points and all that. So we paid extra, extra attention to the music. Thankfully, we were able to come up again with the DAM KEEPER original composers, , Zach Johnston and Matt Roberts. So they did a tremendous job taking this to the next level musically.

Steve: Were they writing the music as you were doing it, or they just came in afterwards?

Erick: You know, this was really interesting. I had them tape the music earlier stage, even before starting animating, so I, because I wanted our animators and artists to be inspired by the music first. And, of course, they had to retime it and resynchronize the animation in the post-production.

So music was almost the standard. In the pre-production, I already give them all, musically, the overall direction and  the things and then the actual key melody and then those iconic moments. And then with them I've be using them as our test sounds for a long, long time. And then, of course, in post-production, when every visual is locked, they cleaned up and polish the final. And, of course, we did the live orchestra recording events, and then that's how we actually created it, the music.