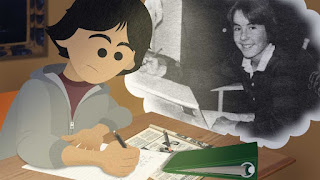 Filmmaker  Dion Labriola grew up being a fan of Ike Eisenmann who starred in the Escape to Witch Mountain movies. A gay youth he retreated into his art work and dreamed of making a film with Ike.  Years later Labriola turned his letters and art work into a project.

A good documentary about how the connection with an actor he never met shaped the course of a life. It’s a movie tale, that is a real labor of love for Labriola who wrote, directed and created the numerous animated sequences that fill the film.