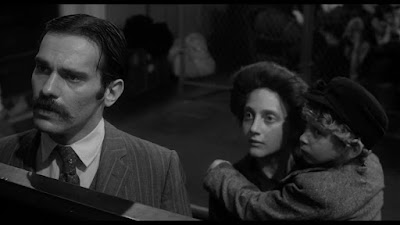 Hester Street rocked the pillars of heaven when it opened in 1975. This small film about the immigrant experience in NYC at the turn of 20th century showed a lot of people what an independent film could do both artistically and financially. It’s a film that got Carol Kane an Oscar nomination. It also seemed to be forever playing in Manhattan or on cable TV in the decade following its release

And then the film kind of faded. What should have been a keystone of cinema in the minds of the masses faded. Many people I know who are old enough to have seen the film in the early days reacted with “Really? I haven’t seen that in years” When I said it was restored and playing the New York Film Festival.

The film is the story of a Jewish couple in the New York City Ghetto. The husband has been working in the city for a while. His wife arrives in New York with their son. She only speaks Yiddish. The pair reconnect and then break apart. It’s a moving tale expertly told.

What I have always loved about the film was its sense of place and time. Few films, even those from the early part of the 20th century felt so much like the turn of the century NYC. I always thought most films felt like movies instead of the actual real places. Hester Street feels like the Lower Eastside.  If you’ve ever wandered around the streets where it’s set you instantly know how right the film got it.

I also love that the film didn’t shy away from using Yiddish and mixing it with the English and other languages that would have been spoken in the tenements. Again if you’ve ever walked the streets from then until today that is exactly how it is. A mix of sounds and dialects.

This is a glorious film that has unjustly fallen out of favor. I blame the fact that much of the film is subtitled for that. Until recently with the rise of anime and streaming too many people simply wouldn’t read subtitles.  Fortunately that has gone by the wayside as more and more people are finding that subtitles don’t bite thanks to compelling TV series from over seas.

Hester Street is a great film and a must see. If you haven’t seen it before you must , not only because its one of the great milestones of cinema but because it’s a wonderful. More importantly if you haven’t seen it in years go see it again, its been amazingly restored in4K and unless you saw it in 1975, odds are it never looked this good.