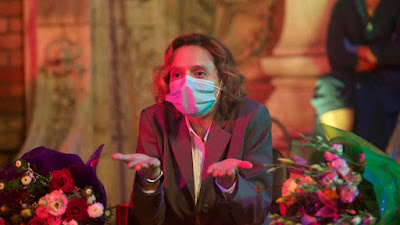 Painfully obvious social commentary follows a teacher riding the wake of having a sex video uploaded to the internet and the trouble is cases in her life.

Completely boring film could easily be trimmed  to a fraction of its running time as sequences go on endlessly. For example the a large chunk of the first hour of the film is the teacher walking  while the camera kind of follows her and occasionally drifts off to look at things that have no connection to anything. There is no reason for it since it doesn't move anything forward.

The film is an utterly useless exercise in social commentary about things such as hypocrisy that are much too easy targets. Repeatedly I just shook my head and wondered why they weren't being daring?

I guess the daring went  out the window when the they decided to open the film with graphic sex. Yes we see the sex tape and its suitably ridiculous. While I have nothing against graphic sex in films I do require a reason to have it there. Why do we need to see the  penetration and the oral sex? No clue. In films like THEY CALL HER ONE EYE graphic sex is there for effect. Here there is no reason other than the fact that the film so uncommunicative at times that if we didn't see it we wouldn't know what got everyone's panties in a bunch. Honestly in a better written film you wouldn't have had to show it, and turned it to making it into being a big nothing.

This is one of the dumbest and most over rated films I've seen at a New York Film Festival in thirty years of going.

Email ThisBlogThis!Share to TwitterShare to FacebookShare to Pinterest
Labels: drama, not worth the effort, NYFF 2021, romania