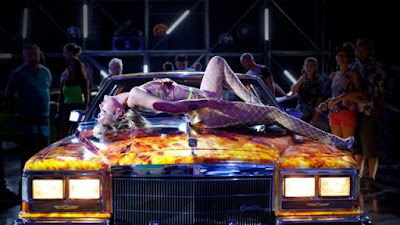 TITANE has to be the most over hyped and over praised film of 2021. A crowd wowing film that has won multiple awards, including top prize at Cannes, this is a film that has made cinephiles and cineastes orgasmic with joy with its button pushing nonsense. It’s a that has delighted the critics with the seriousness of the performances and the discussion of allegory. It’s a film that I was told was causing people to pass out at every screening.

While I like the film, I don’t love it. It’s a overly serious film that is best described as what would happen if John Waters made an Ed Wood film and then shipped it to Europe without telling anyone it was a joke and they remade it and sent it back. I mean the plot of the film has a young woman name Alexia  who is a serial killer being raped by a car, getting pregnant and then masquerading as the missing son of a fireman.  Its played mostly straight to the point I had to fight the urge to scream out “you have got to be fucking kidding” at the NYFF press conference several times.

Basically this is  a mostly humorless, and unpleasant film that has graphic violence, an attempted abortion, a groan inducing breaking of a nose , brain surgery and other nastiness. Some of it has a humorous edge (our heroine realizing she is going to have to kill a whole house of people), but most of  this  is a rather dour and seemingly angling for a point.

I have no idea what the point is. I don’t think there is one other than what the overly intellectual choose to give it because it helps them enjoy a piece of trash cinema/

I would argue that the film doesn’t have a point or meaning because it doesn’t follow through on so much. Ideas of Alexi being a serial killer fighting against the man disappears when you realize she just is killing anyone who annoys her.  Why is the fireman’s son missing when the film implies he died in a fire? It kind of muddies how we deal with grief and loss, not because it isn’t there but because the film bobbles the details of what happened.  The film does that a lot- it gives us one story or one thematic element that collapses because of the details or omissions of the plot.  Honestly we have to forgive too much and bring in from the outside too many details for most of the plot and the themes to really work and have resonance.  This isn’t a case of the audience working with a director but rather it’s a case where the audience has to fix the form the director gave us to have the whole thing work. The film only works if we magically give the broken form life.

I like the fact that this is basically a schlock grade Z film, but all the fun of the inherently dumb plot line is sucked out of it by the serious shifts in tones.  This is fun, its just nasty and off putting for no good reason. Watching the film I kept thinking that Quentin Dupieux could have done a better job. I mean while I may not love all his films I’m always game for how he can walk the line between serious and silly.

Do I even need to mention how derivative the film is? Bits reminded me of the Julie Christie headed THE DEMON SEED, any number of serial killer hiding out and finding grace films, a whole slate of 1950’s scifi films of experiments gone wrong films.

I think the film would have worked better for me if the main characters were a bit more likable. Yes we kind of feel pity for them, but at the same time we don’t like them. My attitude concerning the accident that puts a plate in Alexia‘s head was not “oh my god” but “good the little shit deserves it. “ The fireman is just a pitifully sad man. I never felt anything for him except sadness.

And the illogic of automotive rape aside the film has huge gaps in logic at every turn. Plot threads are dropped, things just happen (the captain’s son is just allowed to be a fireman) and a baby belly three times the size of our heroine is strapped completely flat without breaking the baby or the mothers internal organs. This isn’t a film with a narrative flow, but a plot that is lead around by the director by a ring through it’s nose.

This is an ugly film that is going to be forgotten in a couple of years as the novelty and transgression of it’s moment are forgotten.

For those who want to see an over hyped over blown grade Z schlock drive in film this is a must. For all others take a pass.

For me I will think about what John Waters could have done in the 1970’s in 16mm B&W with Divine and Edith Massey and Tab Hunter.