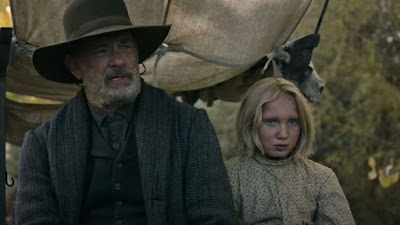 In the days following the American Civil War Tom Hanks travels the country performing the news  for paying audiences. Along the way he agrees to return a young girl who was taken by native Americans and get her back to her family. Along the way all sorts of things happen…

Beautifully made western is a solid tale of the rough existence in the American West. It’s a film about love, loss and family. It’s a film that you fall into and are carried along to the conclusion—which disappoints.

Yea as good as the film is technically the plotting is dead nuts cliché. There isn’t one thing that happens where it doesn’t go as expected.  The film is a catalog of cliched adventures where nothing surprises you. Yea I was dragged along, but at the same time I was watching it not because I wanted to know how it came out, but whether it would do something unexpected. Yea I was entertained but I wanted more.

Worth a look on cable, but I wouldn’t pay for it.