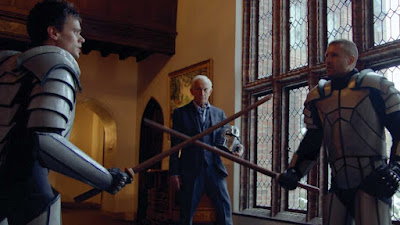 Swords and sorcery movie moved from medieval times to the modern world as young man is revealed to be one of a line of legendary knights tasked with keeping ancient evils at bay.  He is forced into facing his destiny when one of the demons is released from his prison and threatens to take over the city.

Throw back to the era of Goonies and Spielbergian influenced kids film ALPHA RIFT is a film that tries to walk the fine line between being family entertainment and being a modern adventure film. Its amusing and nicely tongue in cheek but personally I would have liked a little harder edge to some of the danger. I also suspect that my reading that this is supposed to be the first salvo in a new multi-platform series removed a chunk of the edge as well. I mean knowing they want to continue thins makes you less fearful of the outcome.

Goofiness aside I kind of liked this. The plot isn’t bad, the characters are good (I love Lance Hendrickson) and the fights are well done. I would be game for a sequel, which says a hell of a lot more than most other platitudes.