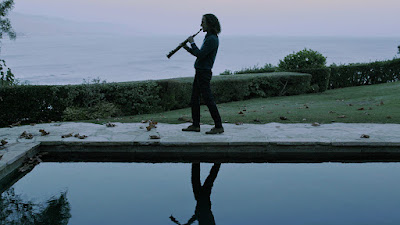 I went into this film figuring it was a goof. I figured it was going to be  bio of Kenny G. I was shocked to find it was something more. This  is not a straight bio but something more its an examination of how one artist interacts with his fans and his critics.

Yes this is a bio, but that's not what you'll remember. What you are going to remember is the critics and the comedians throwing brick bats at Kenny G, and Kenny taking it all in stride. He is fine with people not liking his music. I know you're saying of course he is because it pays him so well, but his acceptance is some where beyond that. He cares more about the joy than the hatred. Its a an attitude that makes the nastiness of Pat Metheny  toward Kenny something that is too much for some of Kenny's critics. He isn't that bad.

For me the real interesting turn f the film is the constant examination of how an artist and his or her critics interact. Should we be throwing brick bats at the things we don't like? Do critics even matter? As someone who throws his opinion out there its a discussion that hit home.

Beyond that this is just a nice portrait of a nice guy. Sure Kenny G can seem a bit bland, but that's kind of to be expected. After sending all this time with him you can't help but like him. Though we really don't get to know him really since there is no mention of his family to the point that its jarring when we discover he has a son in one quick bit. The film then promptly ignores him after that.

Honestly this is a really good film that you need to see.