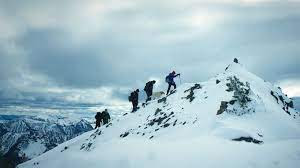 17 years after Alex Lowe was killed by an avalanche in a climbing accident, his body was found in the snow. In the wake of the discovery his son Max, a National Geographic photographer turns his camera on his family as they unpack what happened and what it means now- especially since Conrad Anker who was with Alex when he died married Lowes widow.

A complex film about a mountain climber and the mess life he left behind. Its full of uneasy questions and very raw emotions. This is a film that is going to exhaust you with the emotional pain that is being thrown up by the look into how things played out. Consider that Max and his brothers call Anker dad and their biological father Alex. Now he has to  mourn a man he barely knew before he died. I as left feeling sad and depressed.

This is a great film. It is a film that lays bare the messiness of real life in ways few films ever do. We see how a family is forced to reinvent itself. It also shows how the pain of the past is sometimes best hidden. Its a film that has haunted me in the days since I first saw it. I'm still turning it over and over.

I highly recommend this film- however I do want to point out that you should not go into this film expecting a climbing film. While there are some sequences this is a film about the landscape of the human soul.