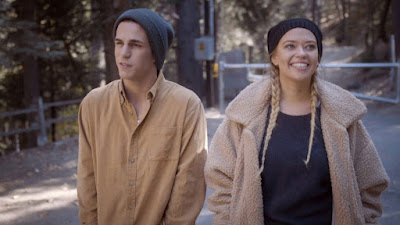 Rachel returns home from college for her grandmothers funeral. She has been away for a while and her return is largely a happy occasion at a sad time. While there she begins to reconnect with her family and friends, particularly her brother Evan who is struggling with addiction issues. Unfortunately Rachel begins making waves unintentionally as she tries to be helpful.

This is a well acted and well plotted film and I don't know what I think of the film. I say  that because the film has some really great  bits, the "resolution" is unexpectedly real.

The battle between cliché and non-cliché comes from the -Rachel character. Differently drawn then everyone else she wanders through the action almost as if she is an outsider. She doesn’t seem to be connected t a lot of the other characters despite being Rachel doesn’t seem to know a great deal. Indeed some of her behavior toward Evan plays as if she has never interacted with him before despite being brother and sister.

On the other hand the connections and interactions between all of the other characters are spot on. Everyone feels related and connected even the non-family members.  Their connection feels real.  Something that really hits home in the final school scene when Rachel is reading before the class and you realize how unconnected she is and how false her behaviors are. Watching the end for a second time I realized  how well written all the other characters were. They all felt alive.

I need to stop and make one thing clear here. My problem with EVAN WOOD is in the writing.To be honest if Rachel was better written I would consider the film one of the best I’ve seen this year but she disappoints. Charlotte Louise Spencer who plays her is fine. She does what she can with a poorly written character. Frankly I don’t think anyone could have played it better she just is stuck playing a deus ex machina and not a real person.

Ultimately, reservations aside EVAN WOOD is worth seeing for the bits that work.

Email ThisBlogThis!Share to TwitterShare to FacebookShare to Pinterest
Labels: dances with films 2021, drama