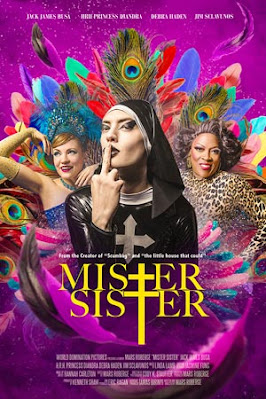 A down on his luck young man stumbles from Minneapolis to New York after a bad break up. Falling in with a drag queen he finds his luck changing. He begins acting as an MC in a drag club under the name Mister Sister, and begins a romance with a single mother.

This is a one of a kind film in the best sort of way. This look at people living and surviving in New York feels more like a documentary than a feature. While I know there was some sort of script involved, I suspect everything was tweaked based upon the wonderful cast. Everyone has to be playing a version of themselves. I say this because no screenwriter could ever get away with this wild and crazy collection of people. Additionally the way everyone looks is the way people look in real life and not movie life.

This is a jagged and raw film that will make you smile and tear up and feel real feelings. As I said this is a film  that more or less feels like it’s a feel good story dropped into the the lives of real people. It’s a film that welcomes you with wide open arms and gives you a hug  whether or not you want it. I say that because I was hesitant to see this film. I avoided it at one festival  and only jumped at the Winter Film Awards screening because I saw it was playing other festivals. Once I was a couple of minutes in I fell into it and had a great time.

Recommended. This is good time with great people.