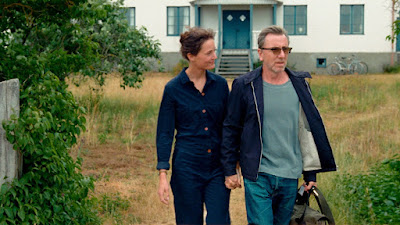 Mia Hansen-Løve’s BERMAN'S ISLAND fell off the table for me when we got to the epilog. It was at that point where Hansen-Løve mucked about reality, because it seems like, her protagonist, she didn't have a clue about how to end her film.
The film is nominally about Tony and Chris. They are married filmmakers who are staying at Ingmar Bergman's home while attending a screening of one of Tony's films and working on new projects.  As they explore Bergman's world, Chris has some adventures and runs into writer's block about the end of her film. She then tells Tony the story, which is also set on the island and involves a sputtering romance. We watch as it plays out... and then the Epilog flops everything.
I was with the film for most of the running time. I know that had I been a major Bergman fan most of this would play ten times better but I was amused  at what was going one. I also didn't mind that the characters in Chris' story were better drawn than Chris and Tony. It was an interesting romance.
What I didn't like was the epilog which punctures another wall of reality to give us an ending that reflects Tony and Chris more into the film Chris is suddenly making. Its a rip that we are just asked to go with and it doesn't really work because it resets the table in such a way that there are way too many unanswered questions- or perhaps loose threads that have to be ignored. It only makes sense internally because Hansen-Løve says it does...and in this case it's not an answer. (or to appropriate one character in the film- A trilogy isn't a trilogy just because Bergman said it was)
The end came and I wasn't moved.
Worth a look for those who can not think and just go with it or Ingmar Bergman fans.
Posted by Steve Kopian at September 24, 2021