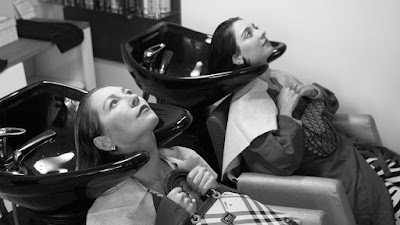 Leo and Maria are a mother and daughter living in Northern Spain who are constantly running scams and doing deals. No matter what they are doing, they always seem to have an angle to some how get ahead, but they never really do.

Gorgeously shot in black and white, EL PLANETA delighted me. Normally I'm not a fan of a mannered film full of dry humor but something about the two women clicked with me and I was happy to go along.

What I like about the film is that it allows us to have mixed emotions about the two women. Normally with a film like this the filmmakers want us to either like or hate their main characters. Here writer-director-star Amalia Ulman  allows us room to like, loath and feel sorry for the pair of con artists. We like them because they are charming, we don't like them for some of the things they do and we  feel sorry for them because its clear that if they played a it y the rules they wouldn't have to lay games and use their glasses the curse the people who did them wrong.

EL PLANETA is a small charmer. What I especially like about it is that while many films that play  New Directors New Films often seem to get lost after the festival this is a film that I suspect is going to have a long life down the road.