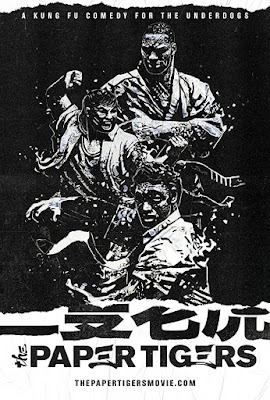 I was curious about Bao Tran's great THE PAPER TIGERS from the instant I saw it listed in the Fantasia film list. I was curious about how the idea of a feel good martial arts film with older guys was going to go. It was a film I had to see and I asked for it weeks before Fantasia started.

When I finally got the chance to see it I fell head over heels for the film. While the most basic thread is similar to other films writer director Tran makes it something absolutely unique by giving us a bunch of great characters operating in a very real way. The result is a film that transcends any notion of being cliche and ends up as a film that you'll want to watch over and over again (trust me having watched the film a couple of times I know you'll want to do the same thing.

I loved the film so much that I reached out to  Tran to tell him how much I loved his film and ask him if I could send him some questions. (I wanted to get in before he is swamped with interview requests). He said yes and the result is what you are about to read.

I want to thank Bao Tran for not only taking the time to answer my questions but also making a really great film.

As this posts THE PAPER TIGERS is going to be streaming tomorrow at Fantasia. Do yourself a favor and make an effort to watch it. And if you can't make the live stream catch it whenever you can. 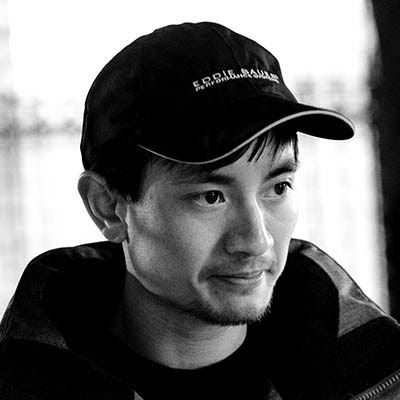 STEVE: Where did the idea for THE PAPER TIGERS come from?

BAO: I started making films at a young age and it was something I pursued pretty relentlessly. But it came to a point where I was feeling burnt out by “the industry” so I thought that could be a good place to start with a story. The clash of growing distant and away from something that you once felt so passionately for. And it could be fun to put that into a martial arts story where our heroes when younger are so full of piss and vinegar and they aren’t aware of the cliff ahead.

STEVE: The casting of the film is a key to its success. How did you go about choosing the actors that you did? Had you worked with them before?

BAO:  Our producer Yuji Okumoto had known Ron Yuan, who plays Hing, for many years so he was an early addition. But we discovered the rest of our lead talent through casting. They all didn’t meet each other until our first day of rehearsals. And it was a miracle that they actually liked each other! Even on their days off they would hang out and study the scripts together, so I couldn’t ask for anything more, it was all thanks to their dedication to the craft.

STEVE: The actors all have a sense of friendship and family that bleeds off the screen, were the actors friends before or did they do anything to make the bonds seem real? Did the older and younger actors meet and work on their performances together so it all hung together.

BAO:  Back to the answer above. The older actors had a genuine affinity for each other, which doesn’t happen as often as you think. For the younger actors, we actually shot their scenes a few years earlier so we could pitch for more financing -- without knowing who would end up playing the older selves.

STEVE:This may be a slightly out there question- PAPER TIGERS is very much it’s own film. You can kind of say that it's like other films, but it really isn’t because you chose to truly focus on characters and to keep the action real. The only film I can remotely compare it to is Clement Sze-Kit Cheng and Chi-Kin Kwok‘s GALLANTS, which has a bunch of older martial arts guys defending their dojo. It also has the same sense of family among the characters. I was just wondering if you saw the film.

BAO: I really enjoyed GALLANTS, but I wouldn’t say we drew closely from it. Like you say, ours is less stylized because I was more interested in the grounded reality and finding the humor in the situation.

STEVE:You worked as an action director on a number of other films, however you didn’t do that here? Why did you change? Was it the fact it was a feature and it would be too much or was it because you wanted a certain style to the fighting?

BAO: I’ve worked on many projects with action director Ken Quitugua and it was a no-brainer to have him involved! He’s got a keen sense of classic Kung Fu styles and also how to shape it into a messier street fighting flavor that was right for our characters.

STEVE:The fights in the film are realistic, especially compared to most action and martial arts films. It’s a move that is wonderfully unexpected and works at building suspense. Why did you go for what amounts to strict realism instead of spicing things up?

BAO: Again, that’s a testament to Ken and his action team, Sam Looc and Kerry Wong. We wanted to go exactly for that kind of suspense and create some surprise. Our guys aren’t Marvel super-heroes where victory is a foregone conclusion. They're schlubs who are unsure they can even lift their legs above their waist anymore. The fun and the challenge for our action design was to get deeper into the premise and not shy away from it, because that’s where the good marrow is!

STEVE:All the films you have directed have directed have an element of crime or violence in them. However since your handling of the family sequences is so good and so touching I have to ask would you like to do a straight comedy or drama?

BAO: Thank you, because at this point, I’ll take any work! For me, the approach is all the same, to figure out what’s going on between the characters and find where the sparks are. I might be butchering the quote but I heard Lin Manuel Miranda once say ‘genre is just the clothes the story puts on.’ Trust in the story first and you can do all things.

STEVE:With Covid altering how films are released, how has the crisis affected your plans for the film? I know some filmmakers have been hesitant to start their runs via streaming fests, was there any hesitation? How are you going to release the film from here now that it has premiered?

BAO: Festivals always have their place in showcasing new voices and new stories. It takes real human thoughtfulness to program a selection. Fantasia has been an amazing event for us to launch our world premiere, virtual or otherwise, because you have a savvy audience that trusts what the fest has curated. Wider distribution and release is a different matter, because now you’re trying to get your film out there through existing channels to a wider paying audience. We do believe this is a great crowd film so a theatrical release would be wonderful. It may not be a traditional theater release for a while, but there’s a lot of successes around drive-ins that we can look to as an example.

STEVE:Now that the film is out among the film going public, what is next for you?

BAO: Sleep! I do have a few projects in mind, but I think we are all watching the world and how film production can get back into full gear. So a lot will depend on that. But I have faith that the world will heal and we can watch movies in a theater again!
Posted by Steve Kopian at August 31, 2020