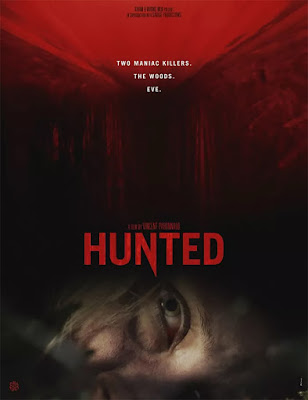 In writing up HUNTED I had a choice to make. Did I take it apart piece by piece from it’s poorly drawn characters (including two psycho killer seemingly drawn out of homophobia), the WTF plotting, the desperate attempts at having a deeper meaning that crash and burn,the uneven English, the failure to be intentionally funny, the general stupidity of it all, and fact that I don’t know if I am offended by the film by the film because of its ineptness or misogyny; or did I just rant about the film about how bad the film without going into all the specifics. I opted to rant because in starting to specifically break the film apart I realized I was going to spend three times the running time on a film best set out in the middle of a field and set on fire.

Young woman is accosted by two guys in a bar. They won't leave her alone and end up kidnapping her by throwing her in the trunk of their car.  An accident sets her free and a hunt of WTF proportions results.

This is a deliberate and wholly WTF slasher film that tries to have a deep and meaningful spin on Little Red Riding Hood and ends up producing unintentional belly laughs.

If this wasn't so badly written it's failed attempt a female empowerment film (I think) and its not so thinly disguised misogyny might be offensive. I'm used to slasher films having a low opinion of women but rarely have I ever seen one as abused and debased by a filmmaker such as this. She isn't a character or a token human as seen in many slasher films, here she is merely a piece of meat to be abused again and again until the comeuppance occurs. To hell with the mystical animal/forest bullshit, they barely enter into the story except as deus ex machina.  This film really hates women  and is so fucking clueless that it needs to be put down.

I don't care that director Vincent Paronnaud made PERSEPOLIS and CHICKEN WITH PLUMS, this film is a mess.  Early on he loses control of the story and the giggles start. It started with the huge chasms of logic, like one of the bad guys deciding that they need to cover their tracks by burning their car on the side of the road after the accident. Why? I don't know.  But then it all turns sillier and sillier as things begin to happen...just because. I literally fell out of my seat when a gang of paintballers just randomly end up running through a scene so the girl can end up with Braveheart like face paint.

This is a truly bad and (oh hell I'll say it) offensive film that will make you stare at the screen in disbelief. Adults who seemingly should have known better made this...

(And can anyone tell me why everyone is speaking in stilted English?)
Posted by Steve Kopian at August 23, 2020

Email ThisBlogThis!Share to TwitterShare to FacebookShare to Pinterest
Labels: fantasia 2020, horror, not worth the effort, wtf