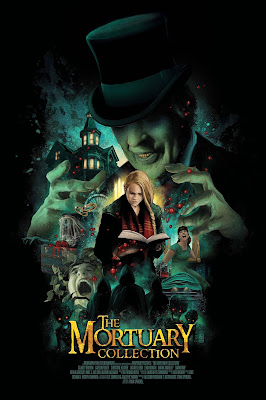 Ryan Spindell's MORTUARY COLLECTION is a blast. It is one the very very rare horror anthologies (ala TALES FROM THE CRYPT) where all of the films rock. Add in the fact that it is also one of the rare horror comedies that operates in the sweet spot between laughs and screams and it all works. Not to mince words this is going to be one of your favorite films of the year, it was one of mine.

The film takes place in the town of Raven's End.  At the town mortuary Clancy Brown (who creates one of his greatest characters) loves to tell stories and is the looking for a new assistant. A possible candidate for his assistant arrives in the form of a beautiful young woman. She is eager, and she wants to hear some the dark stories of the people who went through the doors... Of course the stories are told and to say more would be telling.

Well I will say that one story is about pickpocket, one is about safe sex, another about a husband and his sick wife and the final one is about a babysitter and intruder. I will also add that none of them really go as expected... Which is absolutely wonderful.

I can't say enough good things about this film. This is the sort of fun creepy films that made me fall in love with the movies. This is a Saturday matinee with a box of popcorn, Reeses Peanut Butter Cups, and Twizzlers with my brothers and my mom. This is pure nostalgia updated and made modern to the point that it feels completely modern.

I absolutely love this movie and when it was done I emailed Ryan Spindell and told him so. I also told him I loved it so much that I was going to sit down and just watch it for fun. (I will say that this is a film that rewards multiple viewings- there is lots of riffs and hidden stuff)

This is one of the must sees and best films of the year.

(One word of warning - this film can be really really gross)
Posted by Steve Kopian at August 17, 2020