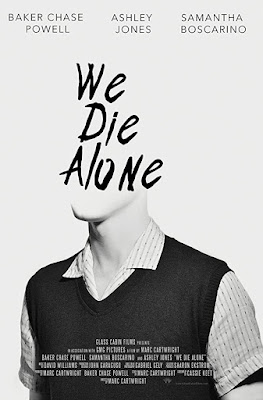 I very much want to hit director Marc Cartwright with something heavy because he has made a film that is really hard to talk about beyond the set up. A young man who bails on love confides in a co-worker who secretly loves him, that he thinks he will never find love. She tells him to just go out and see what happens. Then he meets the girl across the hall from his apartment.

And I can't say any more. I could but that might give something away and this is the sort of film you just want to see on it's own terms so that you get smacked by it's twists and turns. Know that this a dark confection that doesn't go as you expect. Its a wicked piece of candy that will make you sit up and"'DAMN".

And even that is too much.

Just know it hits Prime on August 21 and Gunpowder and Sky’s Alter around Halloween
Posted by Steve Kopian at August 18, 2020