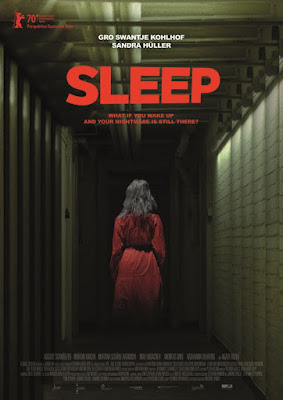 When Mona's mother, Marlene, begins to have weird dreams that are intruding on real life that send her to a psych ward, Mona begins to worry. Something more than a simple breakdown is going on and if the two women aren't careful they could end up dead or worse.

Twists and turns abound in Michael Venus's SLEEP, a slowly building and deeply disturbing tale of... well that would be telling.... you'll just have to see for yourself.

I don't know if all of this makes sense but it really doesn't matter because the script has a dream logic  that is compounded by Michael Venus' direction, which keeps things a bit chilly and distant, much like some nightmares I've had.  This is a real chiller that gets under your skin. Watching the film I initially didn't think it was anything. Then thing began to happen and the reality of the film took over I found myself chilled  and wondering what was really going on.

What a nice little  film.

Recommended for anyone who wants a small gem that's the right sort of chilly.