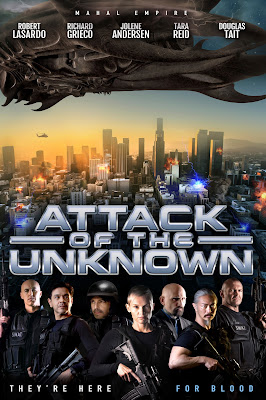 The plot has a SWAT team taking down a notorious drug dealer. When the dealer is do to be moved the SWAT team acts as an escort- unfortunately the move is on the same day the aliens invade. It now becomes battle for survival with everyone having to work together.

A popcorn film, this is what you watch if you want to just relax for 100 minutes. Pure action with some rubber monsters, it is just a unpretentious fun. I had a blast watching this during a lunch break. Yes you will have to forgive the low budget a tiny bit, but it won’t be hard because the cast sells everything that is going on. They are in vested in what is happening so we are invested and it just makes everything better.

If I had any complaint it is that some of the SWAT guys are a bit too much scruffy to be SWAT guys- on the other hand once the shooting starts it doesn’t matter.