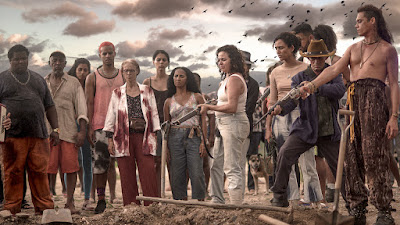 By the late 1960s, the Brazilian Cinema Novo movement was exhausted and burnt out. Despite garnering critical success the world over, the films—defiant Leftist rebuttals of the apolitical Hollywood entertainments choking their domestic film market—couldn’t find an audience in their native Brazil. The proletariat, it seemed, would rather pay for American glamour and seedy São Paulo pornochanchadas than their philosophically bleak and intellectually esoteric art films. Whodathunkit? Partly out of frustration (and partially from the need to finally make some damn money), the Cinema Novo filmmakers changed course away from their previous work and embraced a “cannibal-tropicalist” aesthetic that reveled in gaudiness, bad taste, extreme violence, and kitsch. These films, collectively referred to as the “Third Phase” of Cinema Novo, represent some of the strangest and most unusual to ever emerge from Latin America.

Though Cinema Novo died out in the early 1970s, traces of it can still be found throughout modern Brazilian cinema, perhaps nowhere more than in Kleber Mendonça Filho and Juliano Dornelles’ Bacurau, a film which doesn’t so much borrow from Novo’s Third Phase as present itself as its heir apparent. It has no interest in subtlety or nuance; it wants to offend and shock until you’re squirming in your seat, sweating and faintly nauseated. There are spasms of violence more graphic here than in many slashers, and the displays of human cruelty are positively grotesque. And it’s all in the service of one of the more creative and imaginative films of 2019, a chimera of Weird Western, magical realism, and science-fiction.

The film is set in the small town of Bacurau in the Brazilian sertão which, after the funeral of a local matriarch, begins to experience bizarre things: their community vanishes from maps, their cell service disappears, and strange flying saucers appear before townsfolk. Before long, families start getting brutally murdered in their homes, and with the appearance of odd out-of-towners we learn that Bacurau has been selected by a mysterious coterie of American and European thrill-seekers as the target for a Most Dangerous Game-style bloodsport.

There are entire books to be written about how Bacurau uses its narrative to confront capitalist exploitation of Brazil, as well as violent native resistance against internal corruption and international colonialism. But best leave them to the Brazilians to write. Perhaps the best thing we Westerners can do is watch and listen.
Posted by Steve Kopian at August 29, 2020