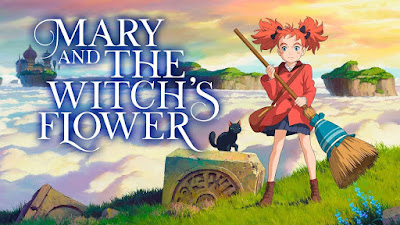 Mary goes to live with her great aunt in the English countryside. Bored and lonely she is left to her own devices. She discovers the mysterious "fly-by-night" a flower that can bestow magical powers on people. Accidentally squishing it on to a magic broom she is sent to a school of magic. There one of the teachers thinks she has great power. Mary confesses its the result of the flower. The teacher eventually kidnaps Mary's friend Peter in the hope that Mary will reveal the secret of her magic.

This  magical adventure has been the one film my niece has been trying to get me to watch for almost two years- I should have listened to her sooner because it is a really good film.

Based on a 1971 novel by Mary Stewart (author of the excellent Merlin Trilogy) the film at times feel like a Harry Potter related tale, but if anything this may have been a story that JK Rowling borrowed from. Actually once you get past the school of magic bits this is very much it's own tale.

While I liked the film a great deal I really wish that Studio Ponoc  and director Yoshiaki Nishimura had transcended their Studio Ghibli roots and given the film something more unique. As with the work of  many other directors who worked for Ghibli this film suffers because the borrowing of the Ghibli style force comparisons which aren't fair. Nishimura and the others are turning out films that can stand on their own and don't need to be viewed as a Ghibli knock off.

Regardless of my quibbling over the visual style MARY AND THE WITCH'S FLOWER is worth seeing. (It is currently streaming on Netflix)
Posted by Steve Kopian at August 23, 2020