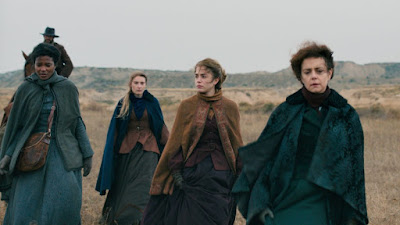 SAVAGE STATE is an art house feminist western that kind of left me scratching my head.

In Missouri in 1863 an American mercenary has a deal go bad. He is acting on behalf of a French official and transplanted French family to swap diamonds for perfume. It goes horribly wrong and the mercenary flees pursued by the surviving smugglers. When the mercenary shows up to talk to the head of the French Family he ends up tasked with taking his wife and daughters to a boat back to France. Unfortunately the smugglers are on their trail.

A gorgeous film to look at the film never really makes it clear what the story is that it wants to tell. Extremely feminist, or trying to be, most of the cast is female and the head smuggler is also a woman, the film seems to be trying to say something about the strength of women…or not. This film seems to think having a lot of women on screen makes it mean something. Subjects are broached as if they are shocking of meaningful, but moments like one of the women confessing to be love with another woman kind of fall flat since it never really connects up to anything.

Actually that is kind of the problem with the film much of it seems like this a series of long languid beautiful scenes that never really connect. I kept feeling that there was something I was missing. This is especially true in the early part of the film where we get to know the women and their lives in Missouri. Things get better once we are on the road but by that time our interest has kind of disappeared.

I’m also trying to sort out the supernatural element that infuses sections of the film. I’m not sure why it’s there. I think it’s got something about a woman’s means of taking control of their lives, but in a film that feels otherwise realistic it is a touch that provides moments but still feels out of place.

To be honest watching the film I keep wondering how this same tale and cast would have been with a slightly tweaked script and a female director. What would Lucrecia Martel or Kelly Reichardt or Kathryn Bigelow or even Lulu Wang have done with the material? I don’t know but I would think it would have played better (and I say this as someone who is not a big fan of Reichardt or Bigelow’s films but as a fan of their ability to make films that at the very least challenge me).