#Unfit The Psychology Of Donald Trump(2020) 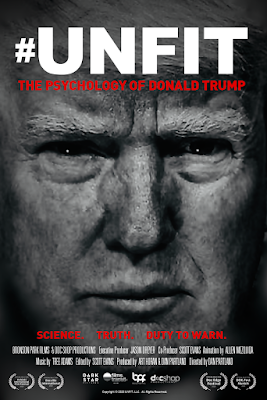 There is a moment in #Unfit where one of the talking heads is explaining the Goldwater Rule which Trump and his supports constantly invoke. The rules says that psychologists and psychologists shouldn’t be diagnosing anyone without interviewing the person. After he is explaining that the rule came about because of what happened to Barry Goldwater in in 1964, over a thousand psychologists said he was unfit to president, the doctor explains that things have changed in the last 56 years to the point where the patient interview is the least helpful part of diagnosis. Since people will lie to the doctor, psychologists instead prefer to observe the patient in everyday life in order to render an diagnosis. Since there is so much video of Trump in action he feels that his diagnosis of the president is the most on target one he has ever made. It is a feeling echoed my many other people in the film as well.

#UNFIT is an excellent dismantling of Donald Trump as a mentally well person. A surprisingly unsensational exploration of the mental space of Trump, the film will remove any doubt of anyone who is sitting on the fence about the Donald. Assuming a free thinking Trumpster came across it might cause them to have doubts but I doubt they would ever look at it.

What makes the film so powerful is that it takes the various mental issues Trump is alleged to have, explains them and then uses footage illustrating the point – repeatedly. This is never a witch hunt with one moment blown out of proportion, it is a carefully reasoned explanation of the diagnosis with repeated examples of why the professionals feel Trump is an unwell man. Even for someone who doesn’t like Trump this is a film that will make you stop and pause.

That said #UNFIT is a great film. It is a vital historical document