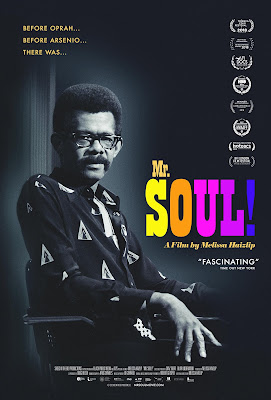 Portrait of Ellis Haizlip who was the producer and host of SOUL! which ran on PBS from 1968 to 1973. It was the first Black talk/arts show and it never shied away from controversy. It also presented live  musical performances from Gladys Knight, Al Green, Earth Wind & Fire, Stevie Wonder and others. The show also had interviews with folks like Muhammad Ali, Sidney Poitier, Cicely Tyson, James Baldwin, Nikki Giovanni, Kathleen Cleaver, Stokely Carmichael, Harry Belafonte and others where they spoke openly and candidly about social inequality and the state of the world. At the same time the show also highlighted the arts with performances from Sonia Sanchez, George Faison, The Last Poets, Alvin Ailey. The show rattled cages and had to fight to stay on the air while at the same time changing the social fabric of not only America but the world.

I like MR SOUL! a great deal but at the same time I want really want to see  more of the clips that made up the show. Of course the fantastic music segments  need to be resurrected, I mean the idea of an epic version of Stevie Wonder's Superstition that ran so long that it went across multiple video tape reels is something I just want to see, but what I really want to see are the multiple James Baldwin interviews or the ones with Kathleen Cleaver or Stokely Carmichael. We need to hear their words now because we aren't that far removed from the time they were fighting for the same things the protesters are doing in the streets today.

The reason I focused on the clips is that Haizlip kind of doesn't make an impression. Yes all of the talking heads discuss him and the show, but he largely steps aside to let the performers and interviewers talk. That is the way a presenter/interviewer should treat things, but at the same time it makes it hard to get a handle on the man himself. After a while I felt that the talking heads were just repeating themselves with them simply repeating the same platitudes.

Of course that makes little difference since the thing you are going to remember is the clips.

Definitely worth a look see. Here's to hoping the release sparks PBS or whomever holds the rights to SOUL! to rebroadcast the episodes.
Posted by Steve Kopian at August 24, 2020

Email ThisBlogThis!Share to TwitterShare to FacebookShare to Pinterest
Labels: music